Why Movember Matters to Me - Little Dreamers Australia

Little Dreamers » Blog » Why Movember Matters to Me

Why Movember Matters to Me

I want to paint a picture for you, a picture of what I thought made somebody a “real man”. A man who is tough. A man with tattoos. A man in dark sunglasses, with a shaved head and a goatee. You might also picture him with a big German Shepard, on a motorbike or yelling at the footy.

All of that would give you a pretty good picture of my dad.

I am lucky enough to work at Little Dreamers, and like a lot of us who work here, I also grew up as a Young Carer. I grew up caring for my dad who has Type 1 diabetes, depression/anxiety and a nice collection of physical health problems that have come from a combination of these issues and a life of driving trucks and fighting fires.

I was 13 when my dad was diagnosed with Depression and Anxiety, but he had been struggling with those feelings alone for a while before he finally spoke to his doctor about getting help. When his doctor asked him why he didn’t come and see him sooner, his response was “Well, guys don’t talk about their feelings”.

I remember hearing the words “boys don’t cry” being said when I was younger, and this later evolved into phrases like “man up” and “don’t be a girl” which were spoken frequently throughout my teenage years. But it was hearing those words from my dad that made me realise that he had spent his life doing the same things I thought I was meant to be doing, swallowing his feelings, laughing everything off with mates and just getting through life.

My passion and work for Young Carers, Mental Health and tearing down the walls of what is commonly referred to as “The Man Box” started because of my dad. His journey of tearing down the walls he had built over his life is what started the cracks in my walls and helped me to break free from the expectation to be tough, stoic, and unemotional. My journey through mental health and mental illness wasn’t as dark and scary as some of the stories I have heard from my peers, it was lit by the torches my dad had placed along his path, and now that I am venturing further along that path into a place where I am able to use my lived experience to help others like me, my dad is there still shining the light ahead of me and supporting me through every step.

3 in 4 suicides in Australia are men, and globally, on average one male dies by suicide every minute of every day. These stats were almost my dad’s story, and they were almost my story, so this year I am growing a Mo’ in support of Movember to shine that light for other men and show them that path doesn’t need to be dark and scary but full of love, hope and caring.

I want to paint a picture for you, a picture of what I think makes somebody a “real man”. A man who is brave and uses their courage to show vulnerability. A man who uses their strength to lift-up those around them. A man who is loving, kind and compassionate. You might picture him helping a neighbour or friend with a project they’re doing, cuddling with that big, scary German Shepard or an adorable, fluffy cat, or laughing in front of the tv with his son over a weekly dinner date.

All of that would give you a much better picture of my dad. 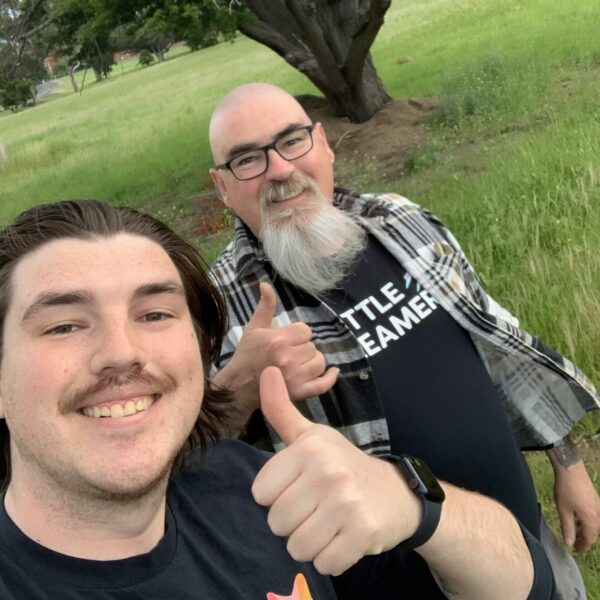 To find out more about how you can support Movember, head to au.movember.com/.

Did you know? 50% of Young Carers live close to or below the poverty line.

Your donation can help.

On Wednesday 10th April I sat in on a co-design session run by ThinkImpact for a super-secret special program that we have been working on for nearly a year now. We had 13 people in the room – five Yo...

Carers in the workplace. It's more common than you think.

Written by Madeleine Buchner, Founder and CEO of Little Dreamers Australia Let's talk about the elephant in the room (or office) - have you ever had a colleague who is fantastic and then sudd...

Growing up as a Young Carer

Written by Madeleine Buchner, Founder and CEO of Little Dreamers Australia   I grew up as one of 2 children. A pigeon pair. Girl and boy. I always believed I could be a good daughter; and ...

FacebookLinkedinTwitterEmail
Back to Top
Menu